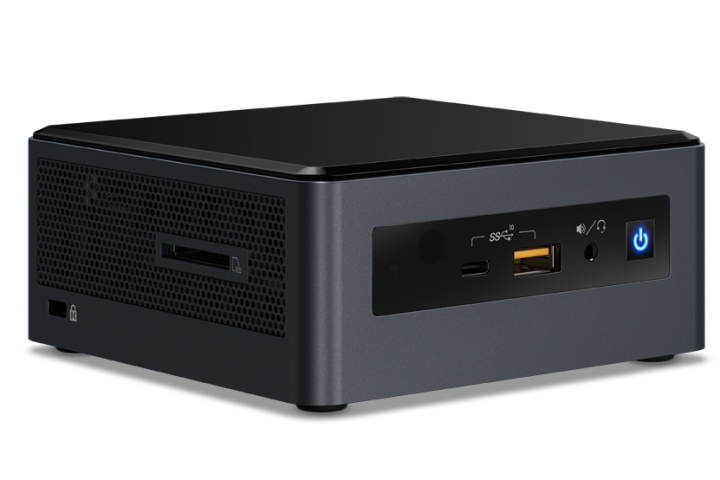 When Intel first released NUCs (has it really been 10 years?) the only option was to buy one as a kit, then add your own RAM, storage, and operating system. At the time they didn’t want to compete with their partner companies that were already making computers and laptops with Intel processors.

All that changed a few years ago when Intel dipped their foot in the “off the shelf” mini computer market. For the first time they offered NUCs that came complete and could be plugged in immediately. Those NUCs were a hit and Intel has continued to offer complete systems along side their “kit” cousins ever since.

While I’m more of a DIY guy when it comes to NUCs, I do see the huge potential in complete systems. There are quite a few people out there who don’t want to bother with buying different components and putting them together; they just want a mini PC. It makes sense.

Intel does offer Islay Canyon in a kit version, so you can get it with or without storage. They sent me a couple of their complete systems to try out. Today I’ll be focusing on the i7 model which, other than the CPU is identical to the i5 model.

Full specs can be found here, but the highlights are:

Intel says this new unit is intended for three markets: light gaming, Windows productivity, and home theater. I can see an i7 with 8GB of RAM being an excellent Windows system out of the box. Light gaming kind of depends on your definition of “light”. But as a home theater PC, I’d expect the i7 Islay Canyon to be over-powered. The i5 model would be a much better fit in that space, so I plan to set it up as an HTPC for testing. After all, other than the CPU the two systems are identical, and I’ve never found a need for an I7 in a home theater PC.

The i7-8565U is fast…wicked fast for a NUC. It maxes out at 4.6GB in turbo, which should be way more than most apps will need. Combined with the AMD graphics, I’d expect the NUC to do quite well in a number of areas.

AMD graphics are going to outperform Intel’s graphics pretty consistently, so it’s good to see Intel incorporating them here, but the 540X seems a little under-powered.

Still, Islay Canyon should benefit from the discrete graphics and the 2GB of dedicated GPU RAM.

As I mentioned, Intel offers Islay Canyon as a “kit” with no storage. They also offer it in two storage configurations: you can get it with a single 256GB SSD or with a 1TB HDD combined with a 16GB Optane module. So you can choose to find your own storage, go with a fast Intel SSD, or bulk up to a full 1TB of storage that’s nearly as fast as an SSD (in some cases faster) thanks to Optane.

My unit came with the SSD option, which turns out to be an Intel 545S series m.2 SSD. It performed respectably well in Passmark for a non nVME drive.

Islay Canyon has 8GB of RAM. It’s slower RAM (LPDDR3-1866) than what you’d see in most of their newer models, but it should be fast enough, and 8GB is plenty for much of what they recommend it for.

The issue is that it’s soldered down. As in NOT upgradeable. As in, you get 8GB…period. No adding more RAM down the road. Now I’m sure you can do just fine with 8GB for your standard Windows tasks, and even some gaming. But it seems like Intel has hamstrung what looks to be an otherwise solid performer by not allowing users to beef up the RAM if/when they need to.

Maybe it was done to keep costs down, but it shortens the lifespan of this NUC. Or maybe it’s just that Intel didn’t mean Islay Canyon for the folks that would want to upgrade their RAM. That’s a possibility, especially when you have the very similarly spec’d Bean Canyon.

It does kind of make sense, as Bean Canyon’s suggested price is nearly $100 higher than Islay Canyon. If you put the two systems side-by-side, they’re pretty close other than the AMD graphics, but Bean Canyon Supports 32GB of faster RAM. Here’s a comparison on Intel’s Ark Site.

What’s in the Box?

Islay Canyon continues with the attractive square design we’ve come to know and love. I’ve seen all versions of NUCs over the years and I think Intel has hit on the sweet spot for the design.

That being said, I would rather this unit used the matte finish lid that comes on Dawson Canyon. The glossy lid that Islay comes with is a fingerprint and scratch magnet. Fortunately, the lids are easy and cheap to swap out. Personally I’d love it if Intel just standardized on the matte lids.

On the front the major change is that instead of two USB 3.0 ports, you now get a single USB 3.0 port (fast charging) alongside a snazzy new USB-C port.

The USB-C port is a nice addition. I don’t have many USB-C accessories, but I do have this:

I tried it out and it worked perfectly. It let me connect another display while passing through a couple of USB connections.

The power button/LED and headphone/microphone jack are also on the front, as is the now standard IR receiver. The LED is controllable through the BIOS, so you can adjust things like flashing, strobing, color, and other behavior. All the way on the left is the HDD/SSD activity LED.

The sides include the nice “screen” pattern for ventilation, and the memory card reader is located on the left side.

The back includes a single HDMI 2.0b (yay!) port and a Mini DisplayPort (1.4), so you’ve got easy connectivity for two or three displays right off the bat. You also get gigabit Ethernet and two USB 3.0 ports.

The reasoning for this escapes me. I realize this has no practical impact (other than my Logitech receiver being inverted) but for me consistency is key. I don’t care if you want them upside down, but pick one orientation and stick with it. Don’t have them oriented on the back one way, then another way on the front. It confuses people.

Opening the NUC up, I’m happy to see they’ve gone with the single ribbon cable design for the drive tray:

I’m a huge fan of this. The first time I saw it was on Crimson Canyon and I was worried about damaging the ribbon cable. But now that I’ve used it for a while, I find it much easier than the separate cables for SATA and power.

Intel has also moved the CMOS battery from the underside of the board to the top.

I think this is a great choice. One complaint I saw online about other NUC models is that if you ever need to replace the battery, or even just remove it temporarily, you have to take the board out of the case. Intel appears to have taken that into consideration. Kudos to them for listening to their customers.

For a very long time almost all NUCs could use their power adapters interchangeably. The wall warts that came with most NUCs could power most other NUCs (the notable exception being the DN2820). Most models would run on anything from 12-19 volts with 3+ amps.

When I initially started testing, I just connected it to the power adapter I’ve been using on my workbench for most NUCs. It powered up fine and seemed to be ok with the lower power.

But when I kicked off a bench-marking utility, the system died during the GPU tests. After I connected it to the power adapter that came with it, it got through all the tests with no issues.

Just something to be aware of.

To get an idea of how the system performs I went with 3DMark, PCMark and Passmark’s Performance Test. Let’s look at the numbers.

The CPU did fairly well:

The 3D performance wasn’t so impressive:

It occurred to me this might be driver-related, as the pre-installed driver was a few months old.

But after upgrading to the latest driver from AMD, the results were the same.

PCMark10 gave it an overall score of 4,674 which isn’t terrible, and 3DMark’s Time Spy test came back with 1,023 (not great). However, both tests gave me the “graphics card is not recognized” error, so that may have played into it.

As I mentioned there are different ideas of what qualifies as “light gaming.” Intel suggested a few games to try:

Several of these aren’t free, and not being a gamer I didn’t want to pay for games I knew I wouldn’t use. But Doom 2016 has a free demo and Forza Horizon 4 has a free level to play, so I went with those. I tested them in 1080P, as that’s where my monitor maxes out.

I started with Doom 2016. I went with default settings. The initial intro was a bit sluggish with noticeable tearing, but once the game got started it was extremely playable. I still noticed tearing from time to time, but everything moved along nicely. Not that I made it very far. If you’d like to watch a couple minutes of me bumping into things, figuring out how my gun works, and trying to walk down a hallway, here’s a snippet of the game play:

Forza Horizon 4 was more impressive. As soon as I figured out how not to crash every few seconds, I was treated to some pretty realistic driving physics. I’m amazed at how much better looking driving games are, and playing on Islay Canyon was a smooth experience. Of course it didn’t last long, as I managed to hit nearly everything but the road. Here’s some of me embarrassing myself behind the wheel:

I decided to try one more game. League of Legends seemed interesting so I downloaded it. When I first ran the game I received this message:

Once I clicked on OK I was able to install the client and go into the training area. Gameplay was flawless and looked beautiful. I don’t imagine this game is nearly as graphics intensive as something like Doom 2016. Everything was smooth as could be. Of course I had no idea what I was doing. Here’s a couple of minutes of me stumbling around and dying:

So the “light” gaming claim from Intel seems to hold true, at least for the recommended games.

I’m of two minds on Islay Canyon. I want to love it. It’s a great design with AMD graphics, a wicked fast CPU, and all the innovative features I’ve come to expect from NUCs. The AMD GPU gives it an edge over NUCs with Intel graphics, and it does pretty well with the whole “light” gaming thing.

But the soldered down memory bugs me. It could be that there are mobs of people out there who just want something to plug in and use, and are perfectly happy trading it in when they need more. But for me more RAM (or at least the option of more) is preferable. It bugs me that I can’t just pop the cover off and add another stick of RAM to run more memory-intensive stuff.

At the risk of being wishy-washy, I’ll say this: If you think you’ll need more than 8 gigs of RAM, there are other NUCs that will be more to your liking. But if you’re OK with the RAM limitation and you’re looking for a ready to go system with AMD graphics and a fast CPU you’ll be pretty happy with this one.