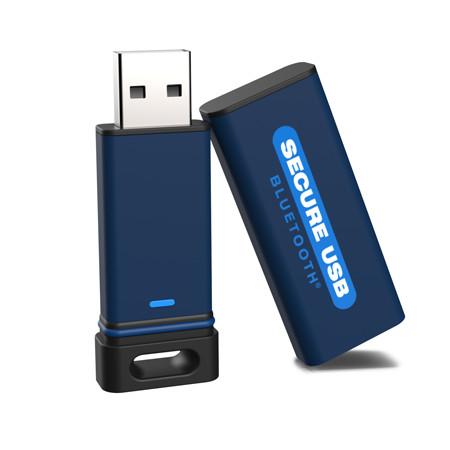 I can’t say I’ve ever given flash drive security much thought. I’ve just always thought of them as entirely UN-secure. It never crossed my mind to put my taxes, credit card information, passwords, or other sensitive stuff on them. That would’ve been like writing my name, social security number, and passwords on a piece of paper and throwing them out the window on the freeway.

But when I came across SecureData at CES, I stopped by their booth to see what they were all about.

After hearing what they had to say, I was curious to see if something like a USB stick really could be “secure.” A few follow up emails later and they agreed to send me a unit to test. Before I knew it, I had one of their secure USB drives in hand and was ready to see what all the fuss was about. I used the drive as my main portable storage (I use USB sticks on a daily basis), and here’s what I found.

SecureData offered me a choice of several devices to try out. I could’ve gone with a USB hard drive, or a USB stick with an actual keypad on it. While those looked cool, I was mainly interested in the Bluetooth USB stick.

I only occasionally use external hard drives, and I’ve forgotten enough combinations in my time to not want to rely on my memory to unlock my data. The unit I selected was the 16GB Secure USB BT. Rather than unlocking it with a combination, you unlock it with your phone via Bluetooth.

It looks like your average flash drive. The aluminum design is both attractive and sturdy. In or out of the case, it feels solid. Nothing cheap about this drive.

If you’ve never plugged in a USB stick…hit up Google and learn all about it. I’ll wait.

Now that you’re familiar, this one is exactly like the rest. There’s a status LED on the drive that stays red when the drive is locked, and turns a peaceful blue when it’s unlocked.

While locked, the drive is invisible to the operating system. It doesn’t show up in Device Manager in Windows at all. It’s a little like plugging in a dead drive. The stick is completely OS independent, so it should work with any system and behave the same way. For all practical purposes, it doesn’t exist in the operating system until you unlock it with your phone.

SecureData seems to have thought of everything when it comes to setup and configuration. To get started, you install their app on your phone. They make that easy by stamping the QR code for the app right on the drive. Just scan the code and you’re taken to the app store for your phone’s OS. The app itself is easy to use as well, walking you through the setup process.

Configuring the drive with the app involves a default key and password. The default password is included in the setup pamphlet, and the key is actually stamped on the stick itself. By default, you use the password (which you can change) to unlock the device. If you enter the wrong password ten times in a row, the drive will reset.

My favorite method was the biometric lock. My phone has a fingerprint scanner, and unlocking it with a fingerprint is very cool. It was 100% successful too. It doesn’t get much faster than touching my thumb to my phone.

While you can lock the drive by pressing the giant red “lock” button in the app, you can also just unplug it. Unplugging locks it automatically. No worries about forgetting to secure the drive. There are other ways to accomplish this as well. For example you can set it to lock after a certain amount of inactivity. You can also set it to lock whenever your phone is out of range.

Both of these are great precautions, but I quickly learned why they’re not on by default. It’s easy to forget you have your phone in your pocket when you go to get a cup of coffee. So you come back to a locked drive.

You can set the drive to read only, which I suppose could be handy if you want people looking but not touching. And there are options for remotely wiping the drive…just in case. As I said, they seem to have thought of everything.

I used the stick daily for two weeks. In my regular day I frequently need to transfer files between computers. I found it to be entirely dependable. There wasn’t a single hiccup (other than me accidentally locking it by walking away with my phone), and it behaved consistently, which is more than I can say about some of my regular USB drives. Across multiple PCs, I never had anything unexpected happen.

Performance was solid as well, and the stick takes full advantage of the USB 3.0 interface. It’s backward compatible with USB 2.0, and I did plug it into a couple of USB 2.0 ports to verify functionality.

I’m sure there’s a ton of advanced technology packed into this little thing to make it so easy to use, but the result is simple. It just works, and it only has two states: locked and unlocked. When it’s unlocked, it works just like any USB 3.0 stick. When it’s locked, it doesn’t exist…at least as far as the OS is concerned. I like the easy stuff.

All this security doesn’t come cheap: at $110, SecureUSB BT is about $90 more than a similarly sized non-secure drive.

About the only thing I didn’t love about this drive was the case fit. When you put it in the case, the rubber gasket tends to bunch up. So instead of a satisfying ‘click’, you just keep pushing as far as it will go. This keeps the case from going on all the way. You can see in the picture below what I mean:

As I said, a very minor gripe, but there it is.

I’m surprised at how much I enjoyed using this USB stick. Before I’d seen it at CES, USB thumb drive security was nowhere on my radar. I went about my days assuming anything I put on a USB stick was inherently fair game. This cool blue stick changed my mind. I can’t fault it at all, other than the ill-fitting case. It does exactly what it claims to do. And it goes about it in a simple, intuitive way. As with most security it’s only as good as its weakest link, and that weak link is usually the user. But SecureData gives you plenty of ways to beef up security, so if you’re looking for a way to keep your data safe on the go, I highly recommend checking them out.