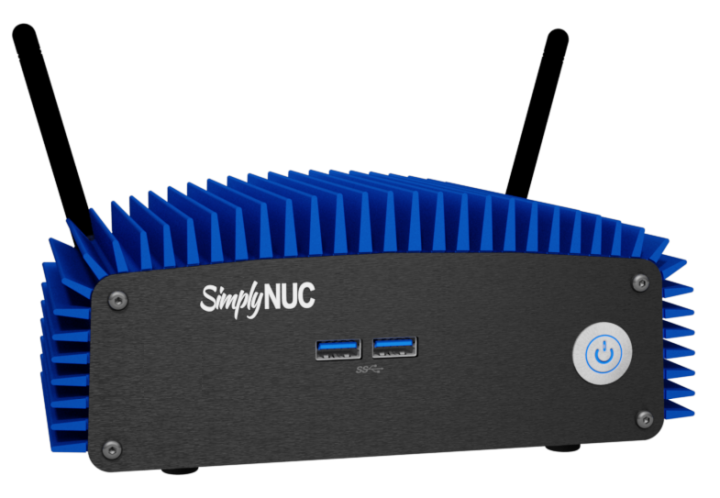 I love NUCs. If you’ve been on my page for more than a few minutes, that should be obvious.  I use them daily, and find them to be extremely powerful and useful little boxes.

One thing about the more powerful NUCs (particularly the i7 models) I’ve never been a huge fan of (pun intended) of the cooling.  On the lower end systems, fan noise is rarely an issue, but when you get into the i5s and i7s, those fans can speed up and generate a bit of sound. Nothing approaching a standard PC typically, but still enough to sometimes be a nuisance. The loudest I’ve ever experienced was a Wilson Canyon i7, that sounded like a tiny lawn mower when it was doing anything beyond web browsing. Ok, I’m exaggerating a little, but you get my point.

Because of this, fan-less cases have always intrigued me.  There are several players in the fan-less NUC case market, and the results I’ve seen have varied from “sure it’s silent, but it’s practically the size of a suitcase!” to “it would be nice if I could touch it without burning myself”. Keeping a CPU cool in a compact case like that without active cooling can be a tricky business.

A new entry in this arena is SimplyNUC’s “PorCOOLPine” line of NUCs: 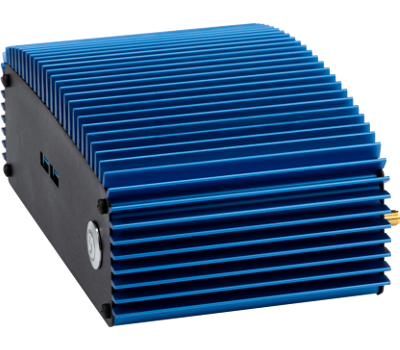 Offered in a configured platform (i.e. not the case by itself, but with a NUC board in it), this new case promises to properly cool a Dawson Canyon NUC, up to an i7.  SimplyNUC sent me a sample unit to play with…I don’t get to keep it, sadly. But I put it through its paces to see if it lives up to its claims. The unit I received is an i3.  To see what’s available, check out the configuration options using the links below:

Taking the NUC out of the box, I was surprised at how cool it looks.  I don’t mean it looks like it would keep the system cool, I mean the wrap-around blue fins are neat. I get the “PorCOOLPine” nickname; looking at it head-on it does kind of resemble a fat blue porcupine: 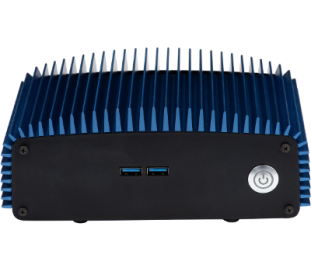 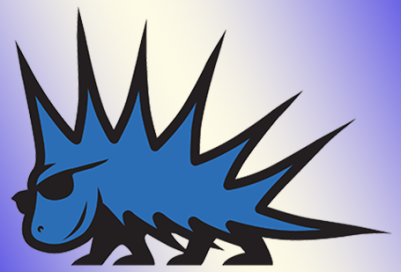 …it’s easy to see where they came up with the name.

It’s a large case. Not massive, just large. A side-by-side comparison with the tall Dawson Canyon makes it easy to see: 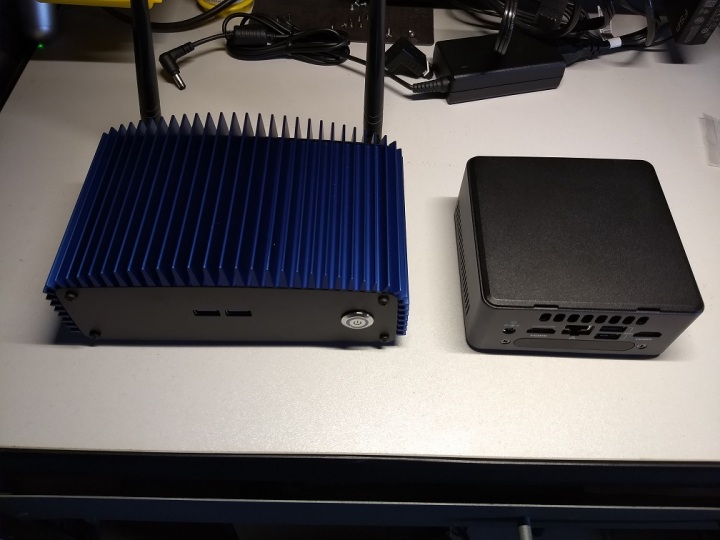 A typical Dawson Canyon NUC is 4.5 inches square, and about 2 inches tall.  This one is 7.5 inches wide, 4.5 inches deep, and 3.25 inches tall. In terms of depth it’s not going to take up any more space, but the width and height are substantially larger.

Even compared to a Hades Canyon it’s tall, though not as wide. 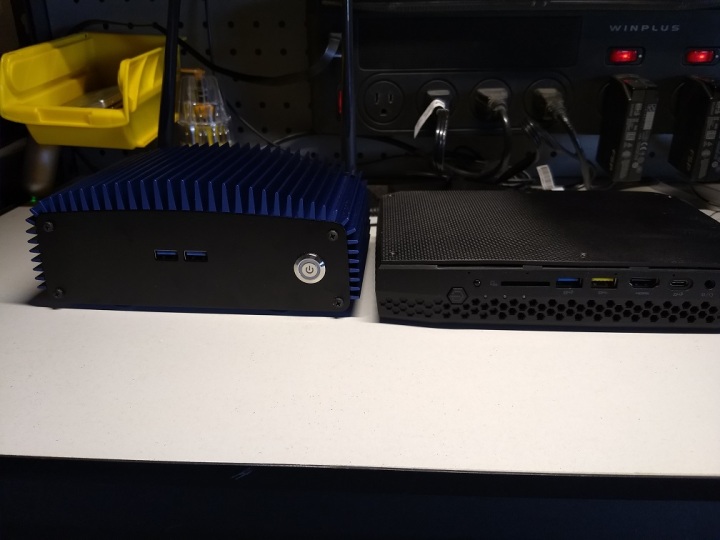 So size is going to be a factor for some.

The blue fins of the case act as a single, wrap-around heat sink.  Its overall surface area rivals heat sinks on full-sized desktop PCs, so it’s easy to see how it could cool the mobile CPU in the Dawson Canyon. 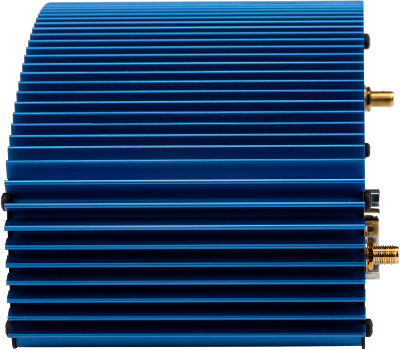 One thing i noticed right away while handling it was the fins of the blue portion have a sharp edge on the front and back, likely from them being cut from one long piece. It wouldn’t be hard to cut yourself on the aluminum. Not really an issue unless you’re a geek like me and are constantly handling it, but still something to be aware of. I would also avoid cables having too much contact with the fins for the same reason.  If you’ve ever snagged (and ruined) a cable by catching it on a sharp edge, you’ll know what I mean.

The material is also surprisingly thick. The back panel measures 3/16th of an inch. 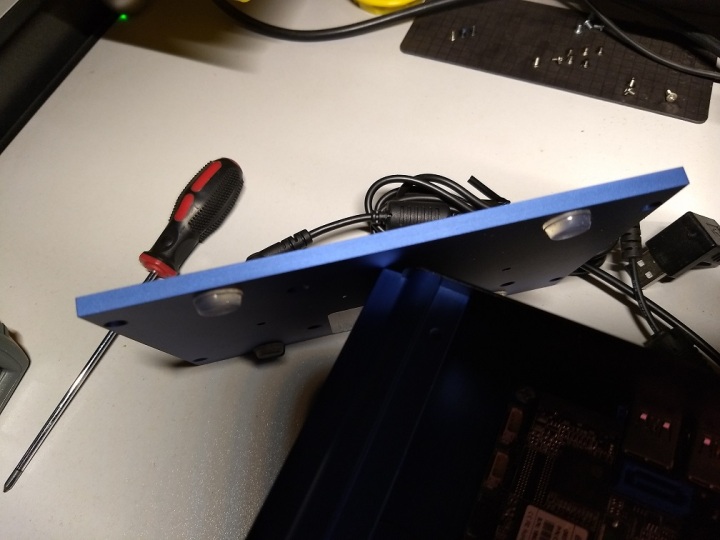 All that beefy aluminum should help disperse heat from the CPU.

With the back cover off, you can see there’s plenty of room around the case. There are no vent holes of any kind, so all heat distribution goes out through the case itself, rather than via air movement. 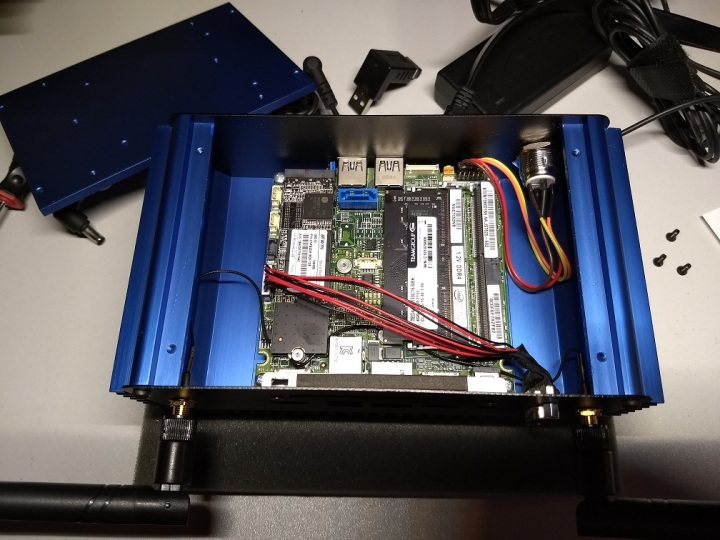 Interestingly, there are configuration options to add a 2.5 inch drive. At first glance I wouldn’t think it would fit, but looking at the back plate there are four unused screw holes. Update: I received a reply from SimplyNUC that these units don’t actually use a drive cage. If you order one with a 2.5″ drive, it is mounted directly to the back plate (using the screw holes previously mentioned).

The orientation of the holes for the mounting screws means you’ll have to keep the different shape of your NUC in mind if you plan on mounting it. 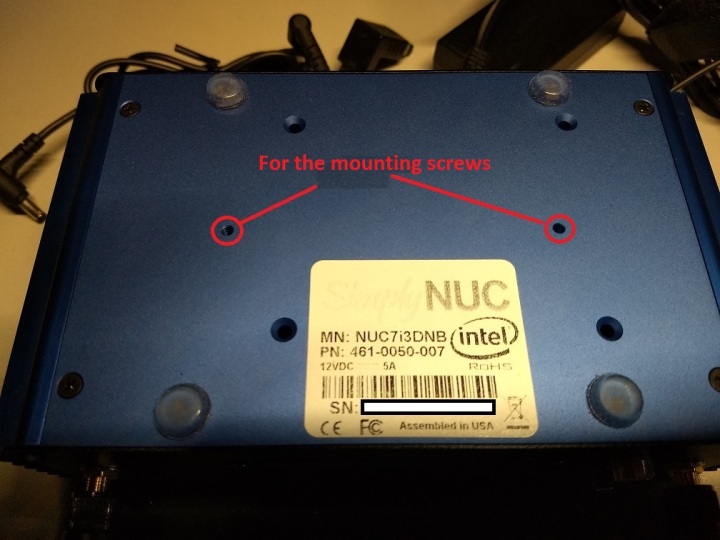 The case is a full 3 inches wider, so in some circumstances you may have to rethink your mounting strategy. For example, I have one of my NUCs mounted on the back of a monitor that’s also using an adjustable wall mount. This means I have it off set from the VESA mounting holes (which the wall mount is already using) with a metal plate. It works great for my regular NUC, but wouldn’t work with this case because it would be too wide. I’d have to reorient the NUC’s mounting bracket or move it entirely to allow for those extra 3 inches. Here it is mounted on my peg board: 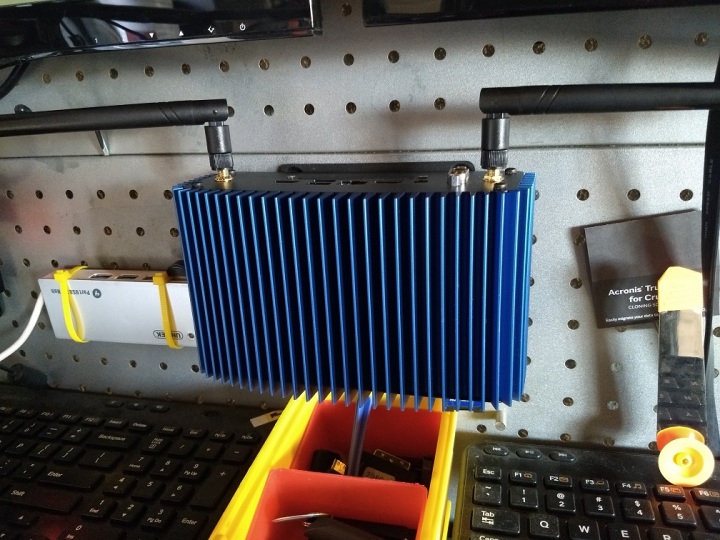 The mounting plate is the same as the standard Dawson Canyon plate, so no issue there, you’ll just need to allow for extra room on the sides. With an extra 1.25 inches in height, if you’re mounting in a tight spot you’ll need to consider that as well.

Another big change with this case is the WiFi antennae…um, antennas..uh, “bug ears”. 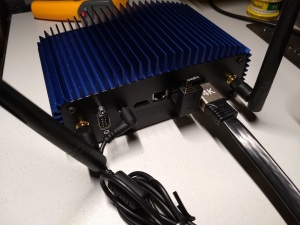 A standard NUC uses the case itself as the antenna, with the WiFi antenna leads connecting to it. For this case, you instead have a couple of external antennae.  They add to the bulk and therefore the space considerations as well. I tested the unit without the antennae attached, and while it did see my WiFi network, it wasn’t able to connect to it.  With the antennae attached, the signal was excellent. Better, in fact, than my Dawson Canyon in the regular case.

Overall, the port configuration here is the same as on the standard Dawson Canyon.

As with many offerings from SimplyNUC, you customize the system before you purchase it.  With Dawson Canyon, you have loads of headers on the board.  The unit I was sent had a serial port installed. Dawson Canyon was built for commercial/industrial purposes, and a serial port can make sense. 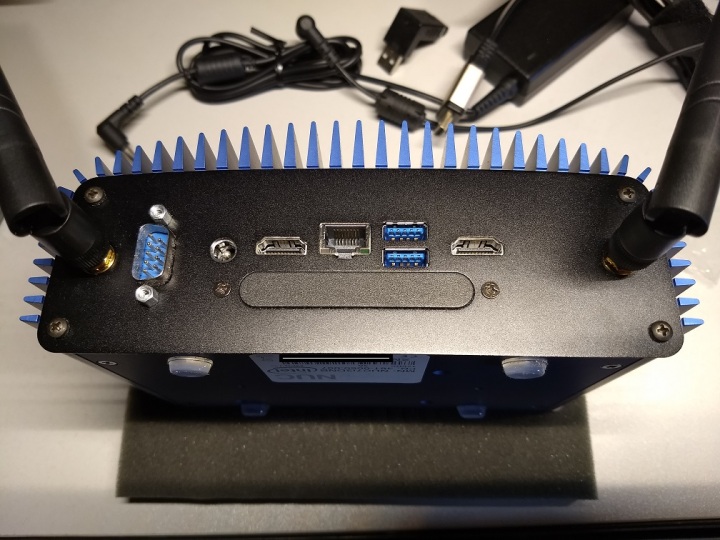 You’ve also got the option of filling out the blank on the Dawson Canyon with extra ports.

With zero moving parts, this NUC variant is completely, 100% silent. I love that.  I’m not going to whine about fan noise on a NUC, because to be honest it’s rarely an issue for me. Still, silent is very, very nice.  When used as a personal PC, this little guy doesn’t distract.

In an industrial setting, sound isn’t likely to be a big concern. But part failure is, and with no moving parts, there’s one less thing to worry about failing.

The biggest question around this new case design: does it effectively cool the system?  Here are some of the numbers I gathered with my new temp gun.

To be as fair as possible, I compared this unit with another i3 Dawson Canyon. Both were configured with memory and an SSD only.

I checked the temp on each while idle, and again while performing typical tasks. To simulate the CPU being under load, I ran Passmark’s Performance Test utility.

As you can see, in terms of overall temperature SimplyNUC’s case is right there with the factory case, and actually does a better job in many instances.

I also ran Coretemp to keep an eye on the CPU temperature. After all, the temperature of the case isn’t as important as the CPU. Coretemp shows you the current CPU temp, but more importantly keeps an eye on the hottest it’s gotten. Here are the side-by-side results between the SimplyNUC system and my Dawson Canyon system, identical other than the case: 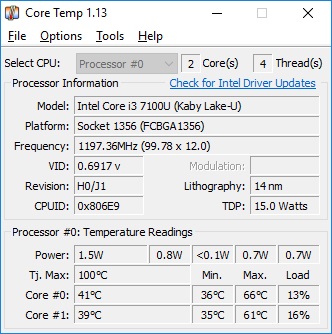 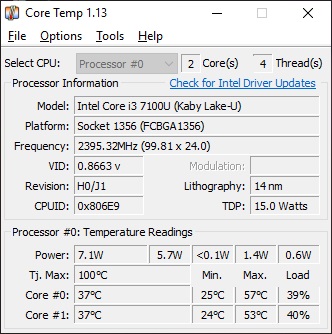 Running similar configurations and identical tests, under the same conditions, the SimplyNUC case did a much better job of cooling. Where my Dawson Canyon CPUs got as hot as 66 degrees C during the tests, the PorCOOLPine Dawson Canyon never went above 57 degrees C.

I left the system on for about a day and a half, using it for various tasks.  Through all of the testing it never felt hot to the touch. Only after running multiple rounds with Performance Test did it approach warm, and even then it was barely warm. Again, this is the i3 model. An i7 would produce more heat, but I can’t speak to how that would translate to touch.

Obviously your actual price will depend on the configuration options you choose, but looking at the price difference between this fan-less option and a standard Dawson Canyon NUC with a similar configuration, it looks like the case will set you back about .  Update: I spoke with SimplyNUC and they plan to have the case offered at $150 above the standard NUC price. That’s great to hear, as it puts this case in line with, and in some cases cheaper than, other fanless case options.

SimplyNUC’s new case has a lot going for it. Performance-wise, it does the job and then some. It seems to do a better job of cooling the CPU than the typical NUC. It’s also a nice looking case, even cute in its “pokiness”.  It’s much bulkier than the standard NUC package, but the designers have done a great job of giving the case some personality.  The external antennae add even more size, but they also improve the WiFi range.

In the i3 model at least, the Porcoolpine case seems to do a much better job of cooling than the standard NUC fan, so it may give you an edge against heat-related failures, and may even prolong the life of the hardware.

Honestly, I’m sad to send this one back. I have plenty of uses for a fan-less, silent NUC, and this guys fits the bill.

As to whether this case design is for you, there are several things to consider. You have to decide what’s more important: do you want passive, silent cooling more than you want the 4.5″ X 4.5″ footprint?  You also need to consider the price. You’re going to pay more for a NUC with this case than a standard model.

If you aren’t too concerned about size, and you’d like to have a fan-less NUC with no moving parts, it’s hard to go wrong with this little guy!