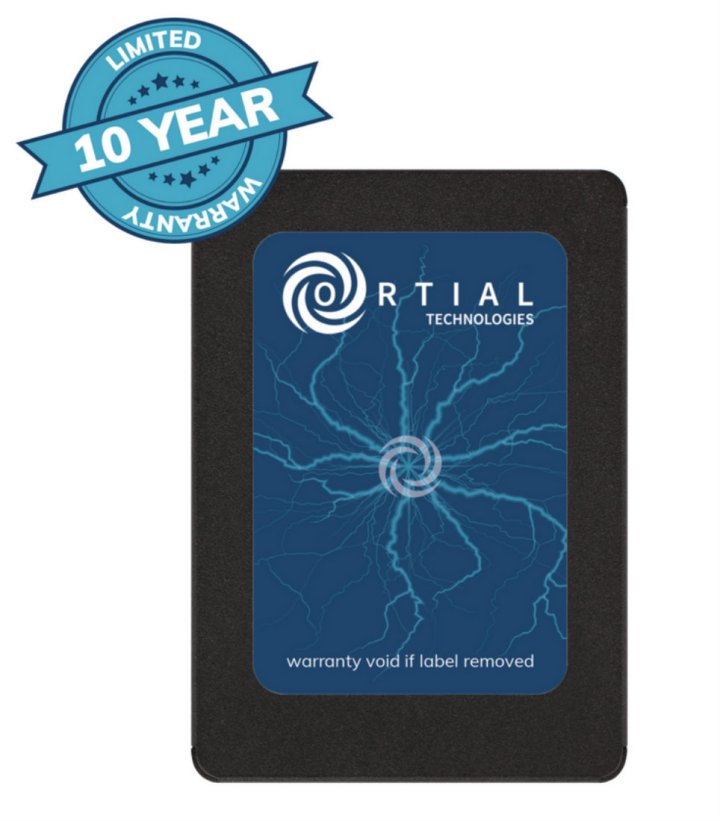 I’ve been working with my Crimson Canyon NUC for a while now, and I’m still of the opinion its weakest link is the hard disk drive. Yes, 1TB of storage is great, but all that space comes with a huge performance hit. Last time, I added an Intel Optane module to the Crimson Canyon, and it brought the HDD up to SSD speeds, making it more than acceptable.  The only down side was a lengthy (but relatively simple) installation process that intertwined the HDD and the Optane module.

After that post, I had several people ask me why I didn’t just buy an SSD for it. Wouldn’t it be easier to just get a 1TB SSD? They’re on the market now, and would be pretty easy to install.  All good points, true. But given the pricing for large-capacity SSDs (around $200), this was a bit out of my budget.

Fortunately I was recently contacted by Ortial Technologies, a relatively new player in the desktop SSD market. They’ve had success in the data center space, and now looking to the consumer market.  They asked if I would be interested in reviewing any of their upcoming products, and as luck would have it one of those happened to be a 1TB 2.5″ SATA SDD. Naturally I jumped at the chance, and they sent me a sample drive.

Ortial’s website lists the following specifications for their 1TB SATA SSD, the OT256STM1TBC:

As of today, the drive is available through Amazon UK for £140.00, which seems to be a competitive price for a 1TB SSD.

It comes shipped in simple packaging with no frills.  You get the drive…and that’s it.

No extra flyers, download links for data migration software. Nothing but the drive.  If your intent is to clone your old drive to this one, you’ll have to figure that out on your own. Not a huge deal for me as I clone drives all the time. There are many free tools out there.

Cloning a 2.5″ drive to another 2.5″ drive with a NUC requires extra hardware. You only have one SATA port, so you’ll need an external drive cage at the least. If you go this route, you can then use software to handle the drive cloning. May I suggest Macrium Reflect? I’ve used it for years and besides being free it also happens to have tons of useful features, and more importantly works extremely well. No, they don’t pay me to say that. I just like the software.

There are other options for the cloning, and in my case I used this guy:

It’s a dual drive USB 3.0 external dock. I’ve had it for a few years, so I doubt you can still get this model, but newer models should be available. It supports 2.5″ and 3:5″ drives, and it’s got a built-in cloning feature that works without the need of a PC. A switch on the back lets you pick between it being a simple external dock and a standalone cloner: 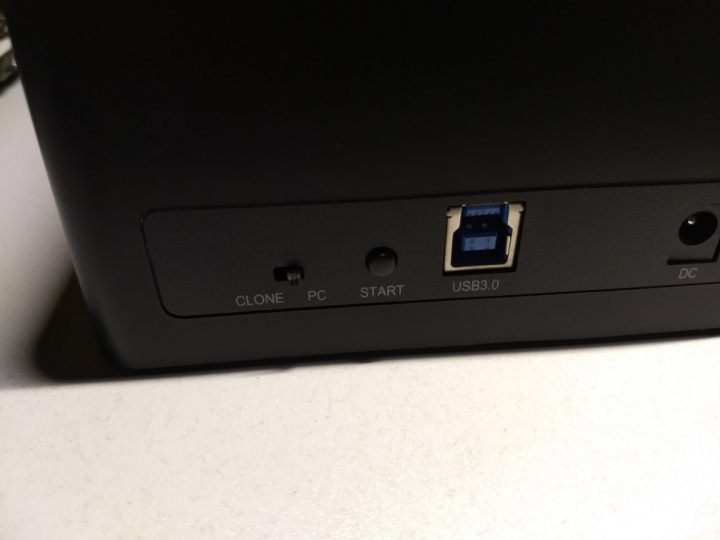 Just pop the old and new drives in, hit the button, and you’re cloning.  Beyond not needing a PC to do the cloning, this also works faster, at least in theory. In practice, it’s kind of hit & miss. But I decided to give it a go.

The first step was to remove the HDD.  Crimson Canyon’s HDD comes secured with two screws which in my opinion are entirely unnecessary.

Everything is such a tight fit, the drive isn’t going anywhere, so locking it in place with screws is just a waste of screws.

The Ortial drive is exactly the same thickness as the HDD (7mm), so there were no issues with the fit:

I inserted the old and new drives, careful to get the order right, and hit the clone button. A few annoying, sharp beeps later and the process began.

In the case of these drives, the cloning took quite a while, because it’s only as fast as the slowest component, and that hard drive is pretty slow. Oddly, you have to be careful when you put the drives in because drive 1 is the destination drive and drive 2 is the source. Why they did it this way I have no idea, but if you don’t pay attention to the labels you could find yourself with two entirely blank drives.

One down side to cloning this way is it doesn’t allow for adjusting partition sizes. Although the HDD that came with Crimson Canyon and the Ortial SSD are both listed as 1TB, the Ortial drive was actually slightly larger. This resulted in some unused space at the end of the drive:

You could always use a partition utility like Partition Magic to resize things and take advantage of the extra space.  Or, if you clone using software, you can adjust the sizes ahead of time.

After the cloning completed, I installed the Ortial SSD in the Crimson Canyon and booted it up. While slightly faster, it still felt sluggish. I went ahead and ran Performance Test to see what kind of numbers I’d get. The results were disappointing:

Something clearly wasn’t right. Moving from an HDD to an SSD should’ve produced a much bigger boost.  Sure it’s a SATA drive, so it’s not going to be as fast as an m.2 drive, but still it should be better than this.  I guessed it had something to do with my cloning method. I’ve had bad clones on the Orico box before.  Rather than re-clone it, I decided to try a fresh install of Windows.

Installing Windows from scratch was hiccup free and fast, compared to installing it on the HDD.  I’d already downloaded the full driver pack for Crimson Canyon, so after installation I set about installing all updated drivers.  Once done, I ran Performance Test again. The results were much better this time:

MUCH better. I never expected a SATA drive to blow my socks off in Crimson Canyon, but it’s nice to see it has at least respectable performance.

Comparing to m.2 and Optane

Ortial’s results were decent, but not quite as good as what I got with the HDD/Optane combo:

This isn’t all that surprising. As a SATA SSD, the Ortial drive is already at a disadvantage over Optane. Where Optane has up to 32Gb/s to play with, SATA is limited to 6Gb/s. So it’s not entirely fair. Still, I’d guess the HDD/Optane configuration would only see those impressive speeds for tasks that had been done before, whereas the Ortial drive will have consistent performance on everything.

Similarly, it can’t quite keep up with an m.2 SATA drive:

So we’re not going to get lightning fast performance, but we’re still more than ten times faster than the HDD that Crimson Canyon comes with:

A Little Something Extra

The Ortial drive does have one more feature that some users will find compelling: the warranty. While most drives I’ve used come with a hardware warranty somewhere between one and three years, Ortial backs theirs with a full TEN years.

You read that right; ten years.  Where we’ll be in terms of SSD technology in ten years is anyone’s guess. But it’s pretty cool to think if I’m still using this drive seven, eight, or nine years from now and it fails, they’ve got me covered.  Reliability is something that seems to be a problem with many products these days. Providing a ten year warranty on an SSD is a good indication Ortial has confidence in their technology.

This is my first experience with an Ortial drive. While it’s a bit hampered by the 6Gb/s SATA interface, it still produces acceptable performance and I had absolutely zero issues with the drive. This is also the first 1TB SSD of any brand I’ve worked with, so I don’t have a side-by-side comparison ready. At £140.00 (about $183.00) the drive is priced similarly to other 1TB SSDs, and its specs line up with them as well. It doesn’t come with any cloning software, so if your using this for an upgrade you’ll need to pick your own solution. The ten year warranty is an awesome thing to have, especially with an SSD.  Like many people, I’ve had SSDs fail, and it’s never any fun. The fact that they’re willing to cover their drive for ten years makes me think they’re pretty confident it won’t fail.  You may not end up using it for the full ten years, but it’s nice to know you’re covered for a very long time.