Does memory matter in your computer? I know…silly question. Of course it does.  The amount, speed, and number of sticks make a difference. But how much does it matter? Everyone knows you get better performance from your memory when you use dual channel (i.e. two matching sticks) vs. single channel.  But I’ve always wondered just how much of a performance boost dual channel memory gives you, and whether it matters in the real world.  I decided to see for myself by trying a NUC with single, then dual channel memory to see if it was a noticeable difference.

While it sounded like an interesting experiment, I had one problem; I didn’t have memory for an effective test. I wanted to use a video editor as my real-world test, and for that I would need at least 16GB of RAM.  I didn’t want to put down a chunk of change (RAM isn’t cheap these days) just to satisfy my curiosity.

Enter the folks over at Micron.  They were generous enough to send me a couple of their Crucial memory kits for the experiment. You know, in the name of science.  I really can’t thank them enough, as without their assistance, this wouldn’t have been possible.  I’ve always been a fan of Crucial, as I’ve found their memory to be 100% reliable and rock solid. Back in they day when I was into overclocking, having reliable memory was pretty important. And the fact that I used the phrase “back in the day” should tell you how long ago that was.

For this test I decided to use my i5 Dawson Canyon, model nuc7i5dnhe.  I could’ve gone with an i7, but for testing I didn’t see a need. After all, the point isn’t how fast the system is, it’s the difference in speed between the different memory configurations.

So, with plenty of RAM to work with, I was in business.

My plan was to benchmark the system with first a single stick, then with both sticks. I’d repeat the test for the different types to see if there was any measurable difference in the numbers. ‘Ballistix Sport Gaming Memory’ sounded pretty hardcore, so it seemed there might be a boost with it over that dumb ol’ regular, non-gaming memory. Surely ‘gaming’ memory would be better, stronger, faster.

I used my (still new) Western Digital Black SSD for the operating system as it was the fastest SSD I had. Like the NUC itself, I expected the SSD’s speed to be irrelevant, as the only variable would be the memory. Still, no point waiting around for testing when I didn’t have to.

For benchmarking I started with my old standby, Performance Test by Passmark. Can’t argue with success, and Passmark has always gotten the job done for me. Rather than bore you with pictures of the results, this time I’ll bore you with a chart: 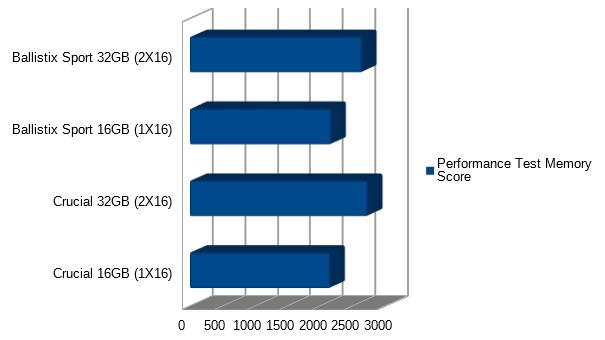 As you can see, there’s a definite improvement in performance when moving to dual sticks.  What’s interesting is that while a single stick of the Ballistix Sport memory just barely outperformed against a single stick of the standard Crucial memory, when you double them up, the results reverse. Two sticks of the non-“gamer” memory actually slightly outperforms two sticks of the Ballistix RAM.

Next, I used PCMark10, which is a fantastic tool for seeing how a system will perform in the real world. What it does is run the system through a series of simulated tasks that you’re likely to see in a work environment; everything from opening various applications, to using spreadsheets, to editing pictures. It breaks the results down into four distinct areas: Essentials, Productivity, Digital Content Creation, and an overall score.

A couple of things to note here: first, dual channel non-gaming RAM is the overall winner.

The big surprise was that, although there was improvement going to dual channel memory, it didn’t appear to be a huge difference.  Common knowledge says faster is faster and more is better. Makes sense.  But I was expecting the numbers to show a larger difference. The winner was the standard Crucial memory in dual channel configuration, but looking at the numbers above, you wouldn’t think it won by much. The overall scores were very close, within 5%. So I decided to conduct my own real-world test to see what I could see.

By now it seemed to me the only way to know what difference the memory really made was for me to actually do something with it.  I thought about a good way to do this, and it occurred to me I’ve been doing a lot of video editing lately. Compiling a video might be a good test. So I decided to use Davinci Resolve from Black Magic Design to compile a 22 minute 1080P video.  I repeated the process with each memory configuration, then charted the results.

You may be thinking doubling the amount of RAM would speed things up all on its own: OF COURSE the video will compile faster with 32GB of memory…you have twice as much memory.  Actually, I thought of that, and I monitored the memory usage during the compile. The total used system memory never went above 4.4GB, so it wasn’t really an issue. Of course I could have forced a limit on the memory through the System Configuration utility, under Boot–Advanced options. But clearly Davinci isn’t a memory hog. It IS a CPU hog, but that’s not what I was testing, so it wasn’t a concern.

Of course this was just one test, but for this particular task, I saw a 25-30% performance boost by using dual channel memory.  That’s definitely worth it in my book.

In a word…no. After my tests showed the gaming memory didn’t outperform the regular Crucial memory, I did some Googling on just what gaming memory was. The answers I found ranged from “gaming memory is better for overclocking” to “it’s more reliable” to “it’s just a marketing thing; there’s no difference at all”.  I’m leaning toward the latter myself. Just as you can buy the same soap marketed separately to men and women, it seems you can buy RAM marketed separately to gamers and everybody else. The good news is, at least with the sticks I tested, they all worked great. They cost about the same and perform within a few percentage points of one another.  So you’re not actually paying a “gaming” premium.

While I can’t speak to overclocking…NUCs aren’t exactly overclocking-friendly…I can confirm I saw no performance advantage. Indeed, the non-gaming RAM outperformed the gaming RAM in many tests. As for reliability, all the memory I tested was 100% reliable. No memory errors or issues with any of it.

I’ve seen benchmark results, and listened to the experts for years explain why more memory channels makes for improved performance. But I’d never been able to quantify how much of an improvement there was. Even my own benchmarking yielded mixed results. In some cases the numbers shows minimal improvement, while others showed significant difference. Ultimately what mattered to me was how it impacted me in the real world, so I opted for a test of something I actually do, and the results showed using dual channel memory gave me a 25% or more performance boost over single channel memory. While this was a single test, and hardly scientific, it was enough to convince me it’s worth it to go with two sticks when I can. Of course, when a single stick is the most practical solution, I’ll be fine. But if I can shave 25% off the time it takes to do some tasks, I’ll do my best to make that happen.

5 thoughts on “Does Memory Matter?”