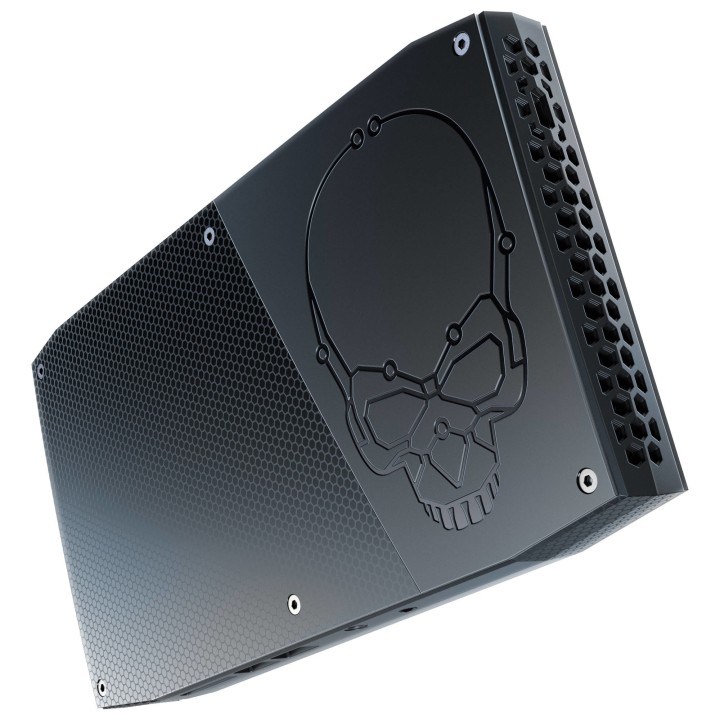 Ok, this one has been a long time coming. I’ve been reviewing GoRite’s NUC add-ons for quite a while, and they’ve got some pretty cool stuff. But last year, when I heard about this, I could not wait. Finally, something for the Skull Canyon.

You see, I’m not a gamer (I might have mentioned that before). So when Intel came out with the Skull Canyon, a power-packed mini PC that they were marketing heavily to gamers, I didn’t get all that excited. It was cool to look at, sure. And boy-oh-boy was it fast. But to me it seemed like a new toy for someone else.

Then when I got it and actually started using it, I saw the potential it had as a mini server. Think about it…an i7 server that could fit easily in a backpack. It had everything you’d want in a tiny, on-the-go server. Everything, that is, except plenty of ports. Four ports is enough for the average NUC user, but to act as a server, it needed more.

Accessory-wise, there hasn’t really been anything for Skull Canyon beyond cables. So when I talked to GoRite about this new “ring thing” they were working on, I was eager to get my hands on one. And here it is. Ladies and Gentlemen, I give you the Skull Canyon add on 4 Port Insert LID from GoRite:

Yeah, the name sucks. But I have a feeling they’ll come up with something better.  Ring Thing? Expanderator? Attic?  Top Shelf? Second Floor?  I can see the tag line now: “Raise the roof on your Skull Canyon!”  No?  Ok, I’ll keep trying.

Whatever they call it, it adds a layer to the Skull Canyon for additional ports. In this case, USB ports. You get two USB 2 and two USB 3, double what the Skull Canyon comes with. Now THAT’s enough ports to get you started.

As always, I’m including a video the installation process. This is my first attempt. No practice runs here, so you get to enjoy a little trial & error.

Installation was a bit different all around. The Skull Canyon is a NUC in name only, in that it has a completely different case design. Over the years I’ve gotten used to the snap on, snap off ease of GoRite lids on the other NUCs. For Skull Canyon, that level of simplicity just isn’t possible.

For starters, the Skull’s lid doesn’t snap on or off. It’s held in place with screws. No plastic tabs to rely on for alignment. This “expander” isn’t a lid, after all; it fits between the lid and case of the Skull Canyon.

With the lid off, I put the “ring” into position. Then I put it into position again, after realizing I had it backward. Once correctly oriented, I connected the cables, which was easy.  In fact, all the free space inside the ring, along with the fact that the connections face up, means connecting the cables is the easiest part.

Positioning the ring turned out to be a little cumbersome for a couple of reasons. First, there’s nothing to hold the ring into position until it’s screwed down. It’s free-floating. Second, the cables inside the ring are very thick and short, meaning I had to work them into just the right position so that they didn’t interfere with the lid or the position of the ring. It took a couple of tries, but I got everything flattened out and lined up.

Once everything was in place, I found I had to hold it that way with one hand, while installing a couple of screws with the other. Once two of the screws were in though, the rest were easy. Also, I find I like the look of the screws supplied with the ring more than the original screws. I just don’t like silver screws on a NUC. Black or grey screws blend much better.

Once the ring was on, I was immediately struck by how good it looked. This wasn’t cheap plastic. Instead it was machined aluminum in a complimentary color and finish. The result? It looks like it belongs. If you’d never seen a Skull Canyon before and you saw this, you’d think that’s just how Intel makes them. The designers at GoRite know their stuff, and it shows here.

The rear ports have blue tabs identical to the factory ports:

While the front ports have white tabs (the factory ports are yellow/blue): 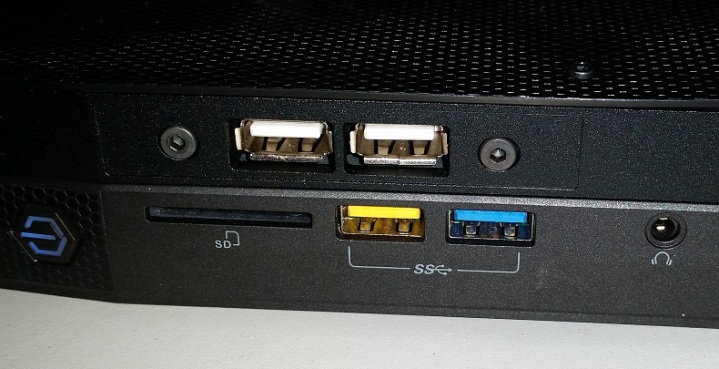 I understand there’s been some internal discussion about changing them to black. Personally, I don’t mind the white. After all, the ports are there to be used, and once something’s plugged in, nobody cares what color they are. Still, changing them to black isn’t a bad idea. Nothing wrong with color coordination.

A quick note: I didn’t notice until I looked at the close-up photos, but the ports themselves are a bit uneven. I’d attribute that to the fact that you have to force the cables into position during install.  With thinner cabling that shouldn’t be an issue. As my “test” unit is a first run, I expect that will be cleaned up for production, and I passed that along.

These photos also show the contrast in color between the ring and the NUC’s case. The ring is a darker grey with the same finish. It’s a nice combination in my opinion.

I tested out the ports with various flash drives, an external DVD drive, a USB camera, and a USB 3 hub. All worked flawlessly. I now have a ready-to-go mini server I can throw in my laptop bag when I need some power on the go. With 8 USB ports, I can’t imagine running out of room for connecting devices.

As much as I like the look and functionality, there are some areas I’d recommend GoRite look to improve, all of them related to installation:

And here’s where the fun begins. It took a long time for this little gem to become available, but now that it’s here I can see the future, and it’s full of ports. Take another look at the inside view:

Just look at all that real estate. Even with the bulky cables, the inside of the ring is about two thirds empty space. That means we could eventually see variations of the ring with all kinds of ports.  How about a second gigabit ethernet port? Or a third video port? Or an external GPU. How cool would that be? It could even house extra m.2 slots. Or a…dare I say it?…a 2.5″ drive bay?

Ultimately I’d love to see a DIY version of the ring, with punch-outs that could accommodate any number of ports. It would be great to be able to buy a basic ring with the extra USB ports that also had punch-outs for later expansion.

I LOVE this ring thing. It bulks up my Skull Canyon quite nicely with extra ports. It looks like it was meant to be there, and once installed it feels solid. Still, it’s only scratching the surface of its potential. With all the free internal space, a lot can be added to beef up the Skull Canyon. I can’t wait to see what GoRite does with this design and adding more options and more ports. More than any other accessory I’ve written about, this ring gets me thinking about possibilities for my NUC. If you own a Skull Canyon, or are planning on picking one up, give this expander some thought. It’s an attractive way to expand an already great mini PC.