Last month I posted about my new TCL 4K TV, which I’m still loving.  One of the first things I noticed when setting it up was that my HTPC NUC struggled a bit at 4K.  A while back I’d swapped out my Skylake i5 NUC for the NUC6CAYS. It was a champ with my old set. At 1080P there was no lag at all, and it got the job done. But when I connected it to the TCL TV at 4K, things got a little sluggish. It would only run at 30Hz refresh, and the menus felt jerky.  4K content (like from Youtube) ran, but wasn’t all that smooth.

I decided it was time for a change. While thinking about switching back to the Skylake, as luck would have it the awesome guys on the Intel NUC team had a new unit for me to try out, and it was an i5 too. Not one to pass up an opportunity to try out new tech, I decided this new NUC would be an ideal candidate to drop in as a home theater PC.

The new system is a NUC7i5BNH.  Outwardly it looks very similar to the CAYS, but appearances, as they say, can be deceiving.  Here they are side-by-side (the BNH on the left, the CAYS on the right): 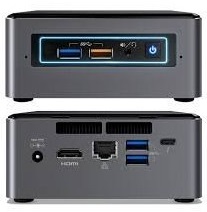 The BNH has a slightly darker and more matte finish. Both look great, but if I had to pick one, I’d go with the BNH…darker is better.  I’d still prefer a matte finish on the lid, as opposed to the glossy one most NUCs come with, but that’s just me.

On the back, they both have the HDMI 2.0 port and gigabit ethernet. The CAYS has its VGA and TOSLINK connectors, where the BNH has the snazzy new USB C Thunderbolt port. In case you’re getting a BNH and plan on using that port for video, remember it’s USB C, NOT miniDisplayPort.  DisplayPort is part of Thunderbolt, but get the right adapter for the job.

Rather than go through every feature, I’ve included this link, which will take you to a comparison of the two at ark.intel.com.

Both NUCs share the 4X4 footprint NUCs are known for, and both come in the same dark grey finish.  Both also have the cool LED ring, customizable in the BIOS and controllable through software. But that’s really where the similarities end.  BNH is a significant upgrade in most ways. Here are some of its bigger advantages:

Those are some big upgrades, not all of which I’ll be taking advantage of. I have no plans for a RAID configuration or 32GB of RAM. But I WILL get some use out of the m.2 slots, and Thunderbolt might come in handy down the road. And let’s not forget that nice, beefy i5 CPU.

All those extras come with a bigger price tag too, but depending on what you’re looking to do, it’s worth it.

What am I Giving Up?

About the only thing the CAYS offers is its on-board 32GB of eMMC storage, which happens to include Windows 10 free of charge. That and the pre-installed 2GB of RAM make it a complete system out the door. I’m not going to be needing Windows, though, and I’m going to use an m.2 slot for a faster storage solution.

The memory card slot on the BNH is microSD only, as opposed to the CAYS’  full-sized SD slot. I like having the slot, and I’ve used it a few times to transfer files. When I think back, I’ve never actually used a full-sized SD card in it, though. I always used a microSD card in an adapter. So the microSD only isn’t a drawback for me.

It’s also good to note the TDP on the BNH is higher (15W, up from 10W), but the fan is only slightly louder. Still very, very quiet.

Speaking of storage, I wanted to go with something faster than eMMC for the operating system, and I love that the BNH includes m.2 slots for both 2280 and 2240 SSDs. It opens up some options for me.  I was able to grab a 32GB 2240 SSD off of Ebay for a ridiculously low $16.  It’s more than enough storage for Libreelec, my OS of choice to run Kodi.  At the last minute I decided to throw in a 320GB 2.5″ HDD as well, in case I wanted to record some TV.  I grabbed a 4GB DDR4 SODIMM off of Amazon for just under $30, and that completed the purchases for the new build.

NUCs just keep getting easier and easier to set up. With everything already on-board, all you need to do is drop in your memory and storage, and you’re done. Observe:

The only missing pieces were the TV tuner and CEC adapter. I know, I know…the NUC comes with CEC on-board. But it’s extremely limited, and I much prefer the PulseEight CEC adapter. So I moved it over from the CAYS NUC. Fortunately the 7th gen NUCs continue with the brilliant/obvious positioning of the CEC connector ON TOP of the motherboard, so installing it was as simple as plugging the cable into the USB and CEC headers. No need to remove the motherboard to get to it.

At the moment I only have power control through CEC (i.e. when I switch my TV to the NUC, it powers the NUC on, and when I power the NUC on, it switches my TV to it), which isn’t much. But I’m in touch with TCL about it and am hoping there’s a way to get full remote support working.

Not much to tell here. I’ve been a Libreelec fanboy for a while now, so I went with the latest version for this build. It installed effortlessly as always. I’ve resisted Kodi’s new skin for a while, opting to switch back to Confluence after installing Libreelec on other systems. But this time I decided to give it a try, and I have to admit it’s not too bad.  A little bland, but very functional and easy to use.

What a difference a cable makes

So I powered on the NUC and it came up quickly. I went to the display settings to see what it defaulted to, and it did indeed default to 4K. The difference from the CAYS NUC was that this one defaulted to 60Hz refresh. The menus worked smoothly and none of the previous jerkiness was seen.  I played a video and playback was smooth. Unfortunately I had no sound.

I fiddled with the audio settings, but nothing made a difference. Then it occurred to me to lower the display settings to 1080p. Boom, the sound was back.  This was odd, because I was using the same cable as I had on the CAYS, and it had sound at 4K. Still I headed to my local Ross store and picked up an HDMI 2.0 cable for a whopping $10. Ross is awesome for that.

When I got home I swapped the cables and sound was working at 4K! I was happy, but also wondering if I’d judged the CAYS NUC too harshly. Was it just the cable that was making it sluggish?  I’d seen similar situations with cables on NUCs before. I’d even seen a NUC not able to fully boot into Linux because of a cable that had worked on others. So I plugged the CAYS back in and guess what….4K at 60Hz. The menus were smooth, and playback was acceptable. There was still the occasional slowness, but I attributed that to the slow eMMC storage or possibly the CPU. Overall it was decent and watchable. So it turns out the CAYS wasn’t so bad after all, it just needed a better cable.

TV on the NUC

I’ve been unable to use my GoRite TV tuner lid since I switched to the CAYS NUC, and like the CAYS, the BNH has the Gen6/7 lid (no opening for the power button, different tab configuration), which meant I still couldn’t use the lid. That made me sad, because that tuner lid and I have been friends for a while now. Fortunately, my old Hauppauge USB tuner was still up to the challenge, so for now at least I’ll have one thing sticking out of the back.

I’ve been setting up HTPCs with Kodi (and XBMC before it) for years, so setting up live TV was no big deal for me. Live TV in Kodi requires two pieces; a backend application to communicate with the tuner, and a frontend addon to access the channels. TVHeadend has been my goto for both. the backend is configured through a web interface (on a different system) and can be a little confusing, but once you’ve done it a few (or a bunch of) times, it’s workable.  However, this time I also wanted a working program guide, and that’s always been something of a hassle. Broadcast channels include EPG information in their signal, so it can be pulled down and used to set up a guide. It’s doable, but not something I’ve ever looked forward to. It usually involves downloading XML files, setting up cron jobs, and generally tearing your hair out. Having done it before, I expected to have to sit through multiple walk-through videos to get it going. I was willing to get it working this time because my new TV, wonderful though it is, only gives me program information for what’s on now, not what’s coming up.

Imagine my surprise when I installed the latest TVHeadend backend (4.2) and found that the program guide was fully configurable from the web interface, no extra XML files required. Seriously, I could not have been happier. Just a few clicks and TVHeadend was downloading the over-the-air guide information. There are tutorials aplenty on Youtube already. But if anyone wants it, I’ll do a walk through.

Happy as a Clam

Now that I’m up and running with the BNH, I’m extremely pleased with it. Everything about it is faster. It boots quickly, navigating the menus is snappy, and playback is smooth as butter, even with 4K content.  As it turns out, I was too quick to blame the CAYS for its issues, as a better HDMI cable made all the difference. Still, where the CAYS was probably “good enough” for a 4K HTPC, the NUC7i5BNH is a powerhouse that offers the smoothness of a system that well within its abilities to give me what I want.

Faster CPU, faster memory, faster WiFi, more storage options, support for more displays, and the inclusion of USB-C/Thunderbolt mean I’ve got more than enough power for today, and some “future-proofing” features as well.