That’s right, I said FOUR ports. A short while ago I reviewed GoRite’s HDMI lid.  I wasn’t expecting much from an HDMI port running off of the internal USB 2.0 header, but I was pleasantly surprised by the performance. Running it on an i5, I had no issues with lag, and the resolution was exactly as described. There was a noticeable load on the CPU when the lid’s port was in use, due to it using the USB header, but on the i5 it wasn’t enough to cause a serious issue. I’m not sure I’d want to run it on an i3, but on the i5 it did pretty well.

GoRite clearly believes if one extra video port is good, then two must be great. They recently sent me a new lid for evaluation, and this one is a DUAL HDMI port. You read that right; it adds two extra HDMI ports to you NUC:

What’s more, this lid’s specs list 4K resolution…well, sort of.  I’ll get to that shortly. As with a few of the other lids GoRite has sent me, this one is kind of a prototype, so don’t judge the aesthetics too harshly.  I’m sure they’ll tighten things up before production.

Who/What is This For?

Adding extra ports is great, but who out there is looking for TWO extra video ports on their NUC? Sure there will be some users who just want the coolness of a quad setup:

Let’s be honest, though. Most of us don’t have the desktop real estate (or the free-flowing cash) for that many monitors.  Hey, if you do, count yourself lucky! Go ahead and set up your war room and start playing tic-tac-toe.

I’d say a larger market for this lid will be in digital signage, where you want to run four signs at once, but don’t like the idea of having multiple NUCs to do it.

Basically, it just comes down to anyone who wants/needs four displays running off of one box.  The possibilities of “quadding up” your NUC are enticing.

and here’s the one that make me stop and scratch my head:

You caught that, right? The feature list says 2K and 4K resolution, but that last one says 4K resolution through USB 3.0. That raises some questions: first, existing NUCs only have a USB 2.0 header, so does that mean you don’t get 4K? Does it mean you get 2K? Do you still get the resolutions and it just sucks because of the low bandwidth?  Does it mean you can get 4K, but only on one port at a time? These are questions that will need to be checked and clarified before this lid is available to the public.  I should be able to get answers to some, now that I have a 4K TV (woohoo!!!!), but I do only have one, so I’m not going to be able to tell if/how/how well dual 4K works.

Just like with the single HDMI lid, this one’s requirements get steeper depending on the usage and resolution:

As far as operating systems go, they list Windows 7 or higher, and Mac OS 10.8 or higher. No mention is made of Linux, so I’d say if you’re running a flavor of Linux you’ll be on your own as far as drivers.

As will most GoRite lids, installation is pretty easy. I’ve been installing and uninstalling them so long I’ve got things pretty streamlined. Check out the ONE MINUTE installation video below:

The Lid as the Only Display?

Before I get into performance results, it’s important to talk about using the lid as the only display connection. In a couple of words, you can’t. I know I said in the single HDMI lid review you sort of could, because you can connect an HDMI cable to just the lid and it will boot to the desktop. But that’s about it.  When set up like this, the on-board display is still sort of there, so what you end up with is a desktop where every screen you try to open doesn’t show up, because it’s opening on the phantom on-board screen.  You can’t even get into the display settings to disable the on-board display.  True, you could eventually work this out by temporarily connecting to the on-board display and moving things around, but it’s just not worth it.  It becomes cumbersome and frustrating very quickly. So I’m back to my original stance, which is there’s no point in doing that. You’ve got an on-board connection; use it.

Going back to the previous review, I did some performance testing on the single HDMI lid to see how it fared in various situations. The main takeaway from that was it wasn’t for gaming.  It was for video playback or day-to-day computing. That lid did well enough on the one game I tried, but the load on the CPU was enough to make me question the wisdom of gaming through a USB port when you have on-board graphics at the ready. I’m also curious to know how the CPU changes with use. If one port adds a certain load to the CPU, will the second port double that? Will it add a little more?  Will it add no extra load at all?

I used the same i5 Skylake NUC to test this lid, for the sake of consistency.

To get started I decided the easiest thing to do was use one of the on-board ports as my primary connection, then check CPU load with one of the lid ports, then check it again with both running. The results…will shock you (not really).

Let’s look at some CPU loads.  To start, here’s the NUC with on-board video as primary and the lid as secondary.  This was on the workbench, so both screens were running 1080p. This is kind of a baseline, so there’s nothing going on:

Let’s see what the CPU load looks like when we play a 1080p video full screen (from Youtube) on the on-board display: 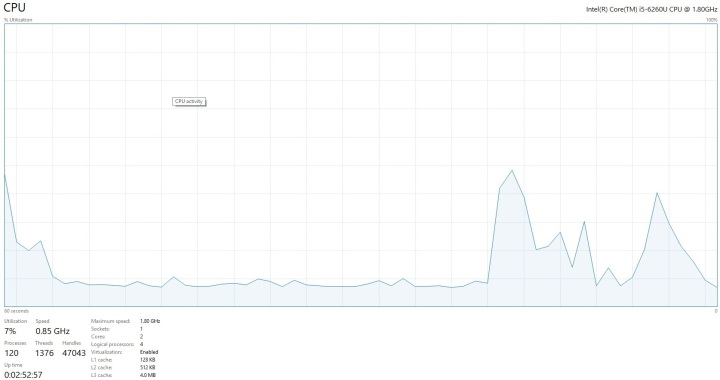 Not much of a CPU load, which makes sense, because the on-board GPU is handling things.

Now let’s look at the CPU while playing the same 1080p video on the lid’s connection: 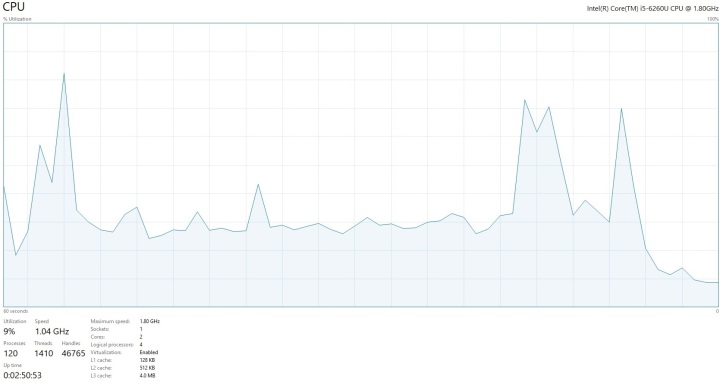 Quite a difference. The load on the CPU jumps by a factor of four during playback. It’s not overwhelming the NUC, but it’s noticeable. It’s also expected, since all the video is pushing through that USB 2.0 header.

Here’s the CPU load during playback of 1080p on BOTH lid ports: 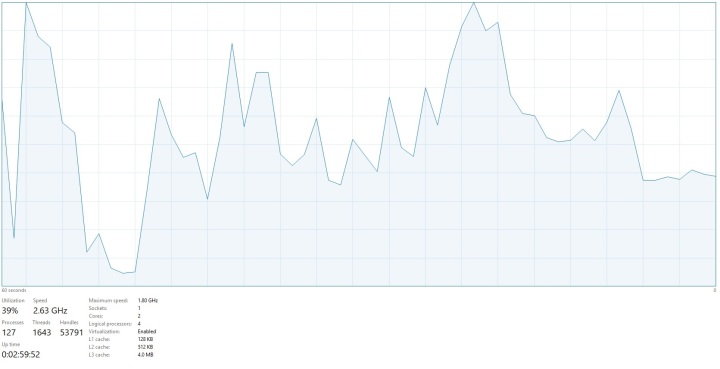 Things start spiking into the upper limit of the CPU. So what this tells me is the more that’s happening on each lid port, the higher the CPU load. Makes sense.

That’s all good & well, but what about the 4K capabilities? For that I connected the lid to my shiny new 4K TCL TV (still loving it, by the way).

The first thing I noticed was the max resolution didn’t look right:

I didn’t think it was a cable issue, since I was using the same cable my HTPC NUC had been using, and it worked at a full 4K. But I swapped it out anyway, and this time got more, better resolutions to pick from: 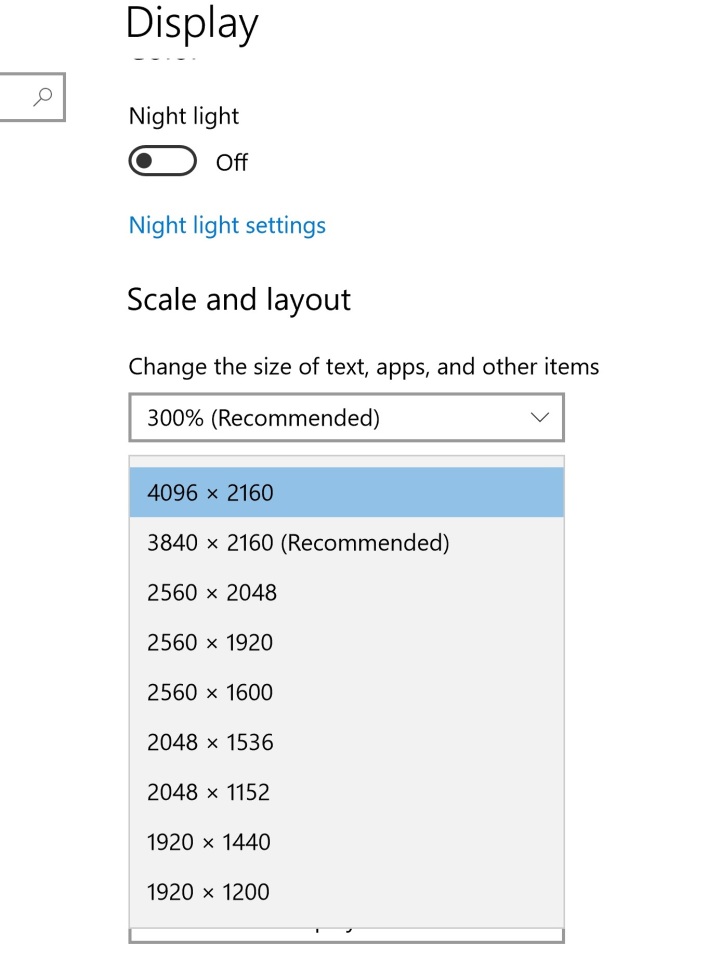 So it seems the lid is a bit more sensitive when it comes to cables. Moving on, I decided to try some 4K video playback. Youtube has 4K videos out there, so I picked one at random: 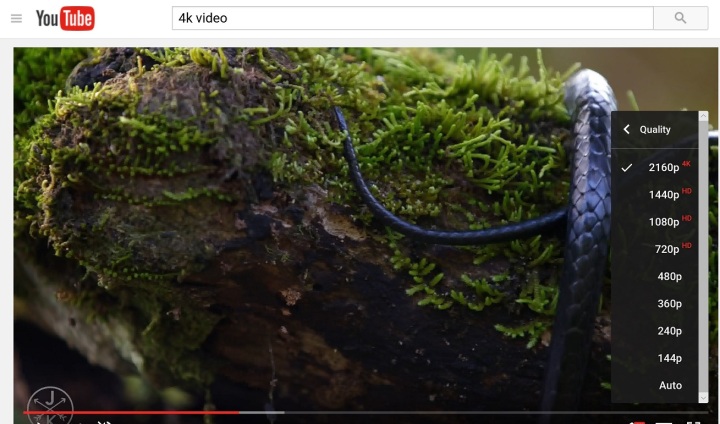 I fully expected the CPU load to be higher when running a 4K video full screen. Instead, it seemed to spike higher, but not keep a sustained higher load:

What I wasn’t expecting, and hadn’t considered, was the memory load.  Running the video on 1080p didn’t hit the memory too hard. But running it at 4K, the memory use jumped to 85% of my admittedly low 4GB.

While running full screen 4K video on the lid, I also noticed all of the byproducts of high CPU load: sluggish, jerky mouse movement, intermittently choppy playback, and sluggish response.  I’d have to describe the 4K video playback as “struggling”.  Running the display at 4K for web browsing was no issue at all, though, as it was responsive and quick.

As I only have the one 4K display, I wasn’t able to take the testing any further. But I’d speculate using both lid ports at 4K would produce even higher CPU loads and memory usage.

So what have we learned here?  Yes, you can get 4K through the lid on a current gen NUC. But the limitations of the USB 2.0 header cause some noticeable performance issues.  The lid’s graphics adapter would fare much better on a USB 3.0 port, which is hopefully in the future for NUCs.  Having said that, for day to day use (web browsing, office apps, up to 1080p playback), it did just fine.

If you have a need for a four monitor setup, and you have a decently powered NUC, one of these lids might just fit the bill.  But it’s important to understand the capabilities and limitations. Pushing dual port graphics through a USB 2.0 header means you’re not going to get anywhere near the performance of the on-board graphics when running at 4K. For 1080p uses, though, the lid does its job.  I wouldn’t recommend running this with anything less than an i5 and at lease 8GB of RAM, however, due to the extra load and how it grows steadily the more you push the graphics.

2 thoughts on “FOUR Video Ports on a NUC? Seriously?”