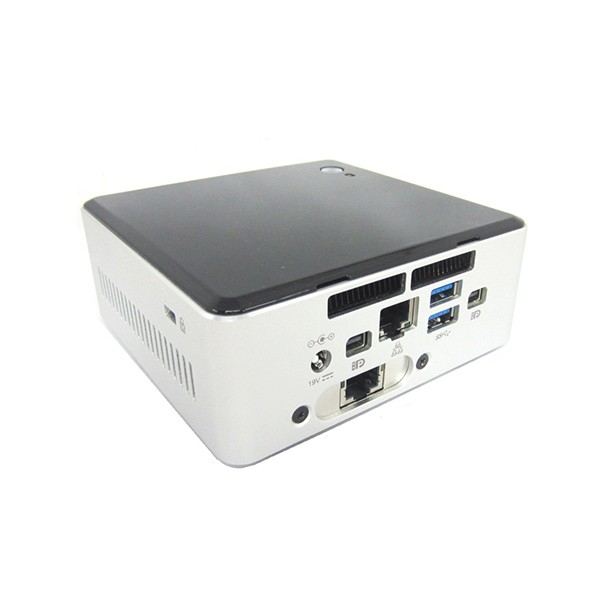 The Maple Canyon NUC from Intel has always had a special place in my heart. Maybe it’s because I got to work (briefly) on the design of it. Maybe it’s the dual mini DisplayPorts. Or maybe it’s just that I love pancakes and anything called “maple” makes me hungry. Whatever, I love the little box. My Maple Canyon has become my main recording system, and I’ve used it for everything from a custom router to a security system (A couple of webcams + iSpy and you’re in business).

Maple Canyon was born as a commercial product, but its versatility is tempting. It’s unique in the world of NUCs in that it has a “blank” on the back designed to accommodate an extra internal port:

When I first tried the internal ethernet adapter from GoRite I was pretty happy with it.  It went in easily, looked nice, and gave me a second NIC to do with as I pleased.  It gave me the option to use the NUC as a router, which was cool. The only thing I wasn’t crazy about was that it was only 100mb. In today’s world of ubiquitous gigabit, 100mb doesn’t always cut it, and I didn’t like that the slow speed limited what I could use it for.

Gotta Get a Gig

GoRite recognized a faster option was needed, and they’ve created an internal gigabit adapter for the Maple Canyon. Check out the video below to see me install it (and ramble on about how awesome the Maple Canyon is).

As I mention in the video, the new adapter is a bit different from the 100mb model.  For starters, once installed it doesn’t sit flush with the case. I thought that would bother me, but to be honest I don’t even think about it now that it’s installed.

It’s on the back after all, and out of site means out of mind.  It’s also matte silver instead of the original’s black plastic.  But the main difference is what you can’t see after installation: the connection. The 100mb adapter connected to the NUC’s internal USB header. The gigabit adapter instead connects through the m.2 slot on the board.  That allows for the higher speed, but it also means you’re losing that slot for an SSD. Not an issue for me, since I’m using a 2.5″ SSD, but still something to consider.

You still have the shorter m.2 slot if you want to add WiFi, but the longer slot will now be occupied.

On first boot up, the new adapter is immediately detected and drivers are installed. It’s detected as a Realtek PCIe GBE Family Controller:

…and it shows up with gigabit capability:

I connected the adapter to my gigabit switch (gotta review that little gem) and had connectivity immediately. By default the adapter was set to auto negotiate for speed, but I’m not a fan of my computer making speed decisions, so I set it to full duplex 1GB.

To check the performance I used a free utility Called NetIO-GUI. It a simple LAN tester and worked for my purposes.  NetIO-GUI reported similar performance between the GoRite NIC (a Realtek) and the on-board NIC (Intel):

Benchmarks are fine, but I also wanted to see it perform. So I grabbed an ISO file that was just over 1GB and copied from another NUC. The file took approximately 10 seconds to copy, and as you can see the performance between the two NICs was virtually identical: 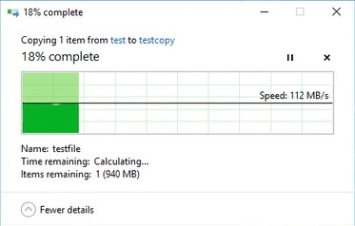 I connected the GoRite NIC to my router and used it to browse a few web pages and download some files. I knew my router would be the bottleneck for this, but I wanted to be sure the NIC didn’t have any weird drops or issues.  I’m happy to report it went off without a hitch.

I thought the non-flush fit would bug me at first, but I actually liked the way the new adapter looked, and I forgot about it almost immediately.

Hardware installation is easy, even easier than the 100mb adapter just because I don’t have to deal with the tiny on-board USB connector.  If you can install an m.2 drive, you can install this adapter.  You do lose your m.2 slot using this adapter, so you’ll be limited to a 2.5″ storage drive. As I said before, not an issue for me, but keep it in mind.

No additional drivers are needed, which makes getting it up and running all the easier. Performance-wise I couldn’t be happier. I wanted gigabit, I got gigabit.

This adapter adds an awesome, solid second NIC for anyone with an itch to make a custom router, gateway, monitoring device, or anything else that needs dual gigabit. It takes advantage of that port opening to eliminate the need to have a USB dongle sticking out of the unit.  You end up with a much more attractive look, and there’s no worry about breaking off a USB device if you need to move it around. I can definitely see the market for this setup, what with security being an issue for so many people these days.

This one’s a keeper!