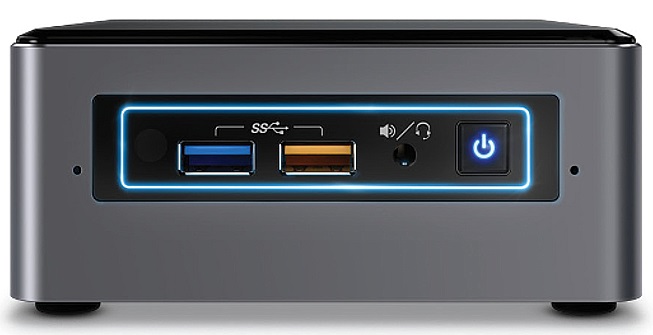 In my initial review of the NUC6CAYS, I was pleasantly surprised with the LED ring on the front of the unit. It was a neat idea and added a little “cool” to the NUC. I wondered, though, whether it was a good idea to have such a large LED flashing on the front of the NUC when used for a home theater PC.  I decided to poke around in the BIOS to see if I could possibly disable the LED. It turns out this unit has a bunch of configuration options for both the LED ring and the button LED. You can control everything from the color and brightness, to what function the LEDs represent.

The settings can be found in the Power section of the BIOS, under “Secondary Power Settings.” I didn’t see these initially. I can’t be sure, but I don’t think they were all there in the factory BIOS.

As you can see, when it comes to customizing the look and function of the NUC’s LEDs, you’ve got more than a few options. Some of the settings are simple; you have options to control the LED’s function, color, and brightness. Colors for the power button LED are limited to either blue or amber. Nothing big there. But the LED ring lets you choose from several colors. That makes for some fun stuff, and some nice color combinations. .  The remaining options give you full control over how the LEDs behave in various power states. That includes color, brightness, and blinking.Want the ring  to pulse red when in S0?  You can do that.  Want it to be solid green when the NUC is on, then go yellow when asleep?  Yep.  How about controlling the brightness AND speed of the blink rate?  You got it.  There’s some fun customization to be done here!

The first thing I wanted to try was swapping the function of the LEDs.  Using the Button LED and Ring LED settings, I was able to set the ring to show the power state and the button to show HDD activity.  It worked exactly as I wanted, and was far less distracting when trying to watch TV.  Then I played around with different color combinations, different pulsing for the ring, etc.  It was fun to see the effect of the different settings, and I found some combinations especially attractive.

Here’s a video of me trying out some different settings:

There’s one setting I wasn’t able to try out, and it’s available for either or both of the LEDS. It’s labeled “SW Control”, and I can only assume it’s there to allow direct access to the LEDs through an API or some other software method. It’ll be interesting to see what Intel makes available for direct control.  I can see the ring being used for things like pulsing with the beat of music being played, or even as a sort of lava lamp-style room light.