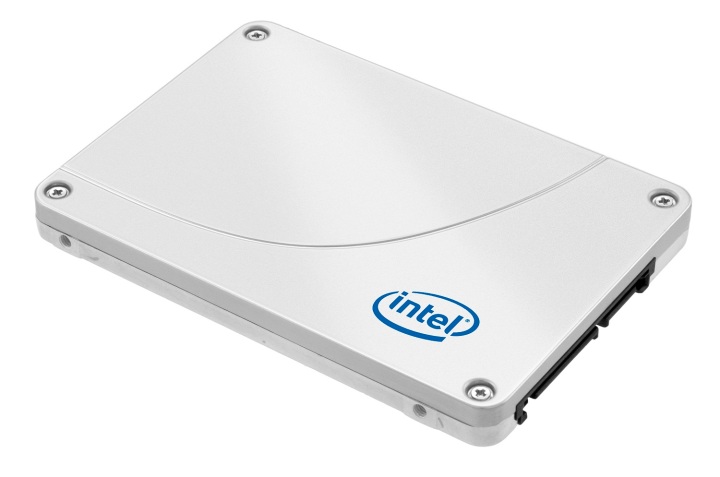 First, a disclaimer: I make no guarantees that any part of this process is going to work for you.  Try it entirely at your own risk. Consider yourself warned.

Second, if you don’t feel like reading the full story, you can skip to the needed steps.

I recently reviewed Intel’s first complete NUC system, the NUC5PGYH.  While I’ve been mostly pleased with its features and performance, I was less than thrilled with the piddling 32GB of eMMC storage it comes with.  Things took an interesting turn when I ran Windows Update. It installed a bunch of updates, but there was a large one that wouldn’t install.  This one was for Windows 10 Home, version 1511, 10586.  It was a pretty substantial upgrade. I kept getting a vague “We found some issues” message: 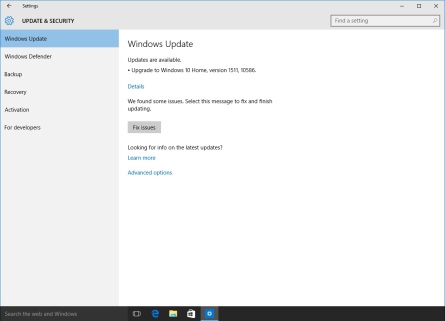 Clicking the “Fix Issues” button simply started the (very large) download again.  After several reboots and retries, I got to a different screen, where it complained about not having enough space on C: 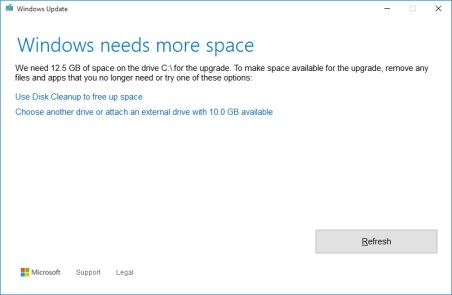 So I set about cleaning things up.  I cleaned up some downloads, some temp files, etc. I tried again. Same error…need more space.

Fortunately the installer had the option to use a different drive for temporary storage. So I added a USB flash drive and pointed to it.  Things started to move again, but then another error came up saying that even though I had added storage Windows STILL needed more free space on C: 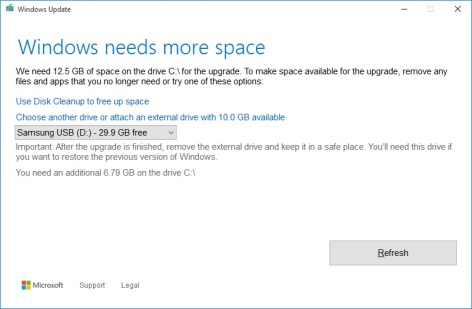 Ugh…you know what, time to just clone this eMMC onto a larger drive and get on with my life.  So I attached an Intel 80GB SSD via my USB dock. I downloaded the Intel Migration Tool and told it to clone my eMMC to the SSD.  Everything went along smoothly until the system rebooted to start cloning. Then this happened:

Weird…was there a problem with my SSD, I wondered?  I clicked through the errors, rebooted, and checked my SSD…all green, all good.  Maybe there was an issue with the eMMC, I thought. Checked that, but again no issues at all.  Ok, so maybe there was something wrong with the Windows files. I ran sfc/ scannow. After a while it came back and said everything was fine.

Aha! Now I had it; it had to be because I was using a USB dock. So I cracked open the NUC and installed the SSD directly.  Tried again. Failed again.

This was getting irritating: I was using Intel software on an Intel NUC to migrate an Intel eMMC to an Intel SSD. And so far this thing was treating me like an ex that you run into at the grocery store.  Ok, technically the software was Acronis, but still. You’d think things would go a LITTLE smoother. To quote the immortal Harrison Ford; “How can IT not know what IT IS.”

I poked around the internet looking for clues, but found nothing definitive. So I decided to try a different cloning method.  Ordinarily I’d just pop out the offending drive and put it in my dual dock and clone it that way, but the eMMC is soldered down so that’s a no go.

I started researching free cloning utilities.  I tried several, but found that most had similar errors, or completed the clone but the drive wouldn’t boot, or wanted me to pay for the full version to complete the clone.  I wasn’t planning on doing this again, so I didn’t see the need to drop $20-$50 on a tool I was only going to use once.

Finally I found a tool that worked. It’s called Macrium Reflect.  Now, I’m not a shill for their product, and honestly I know nothing about it except that it’s free and was the first tool that successfully cloned the eMMC. From what I can tell it’s a solid backup/cloning utility and it does the job.

So the clone worked great (yay!) but the tool wouldn’t allow me to resize the partitions (not yay).  The layout of the eMMC was such that it had a recovery partition as the last partition on the drive, so Reflect didn’t have an option for making the regular Windows partition larger (presumably because of this recovery partition being in the way).  I went ahead with the clone, and ended up with a fully bootable SSD with the same dinky 32GB of space.  Great, so now what?

Well, it all worked. I was then able to run Windows Update and get the updated version downloaded.  It was a bit more work than I’d planned on, but in the end I got there.  I now have a fully functioning and up to date unit.

I’ve considered trying to clean things up enough that I could copy the updated Windows back to the eMMC just to see if it would fit, but for now I’m fine with it as is.

Hopefully this will help some other folks who may run into the same issues with their tiny eMMC.